After a long hiatus due to our first field season (studying migratory northern pike populations in northern Wisconsin), we will be picking back up with updates in the near future! Updates will be coming from various research and other media sources, as well as our base of operations in both Chicago, IL and Detroit, MI. Lots of exciting things on the horizon, so please keep checking back! 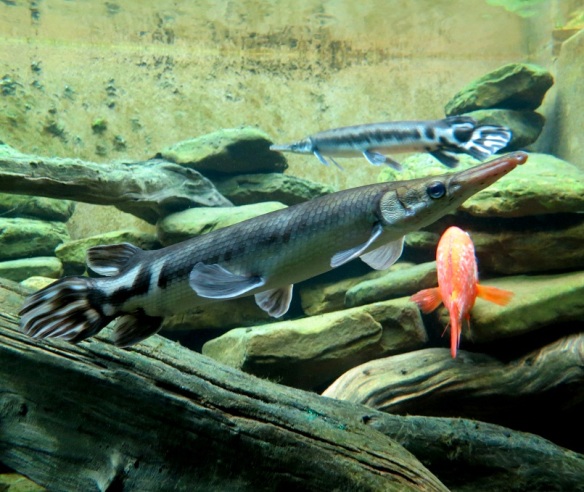 Until next time, here is a photo of a tropical gar (Atractosteus tropicus) which is now on exhibit at Shedd Aquarium in Chicago. The tropical gar is one of two tropical members of the family Lepisosteidae (gars), and ranges from Mexico to Costa Rica. These fish are aquacultured in much of their range both as food fish and to restock dwindling wild populations. You can see these fish on exhibit in the “Islands & Lakes” gallery of Shedd Aquarium as well as at the Belle Isle Aquarium in Detroit, MI. These particular fish were also part of gar research by PrimitiveFishes.com co-authors Solomon David and Richard Kik IV.

In anticipation of my upcoming trip to Villahermosa (Tabasco state, Mexico), here is a great video put together by colleagues at the tropical gar aquaculture farm (Otot-Ibam) highlighting their gar production.  Great shots/sequences of gar development and the culture process.  I’ll be presenting at the 4th International Meeting on Lepisosteid Research in mid-June, and we’ll get to tour the farm as well as participate in workshops.