Lungfishes (Sarcopterygii, Dipnoi) are considered to be among the most primitive living fishes. More specifically, they are the oldest extant lineage of jawed, bony fishes.

There are three families and six extant species of these ancient fishes.  Four species are found in the family Protopteridae (African lungfishes) and one species each in Ceratodontidae (Australian lungfish) and Lepidosirenidae (South American lungfish).

The Australian lungfish (Neoceratodus forsteri) is considered the most primitive extant species of lungfish, with the African and South American species more derived and more closely related.

As their name suggests, members of this group possess 1 lung (Ceratodontiformes) or 2 lungs (Lepidosireniformes) which they use to breathe atmospheric oxygen.  When young, lungfishes possess external gills, which are lost (in most species) as the fish develops.  Members of Lepidosireniformes are capable of estivation, a state of dormancy and low metabolism during periods of desiccation.

As lungfish develop from juveniles to adults, their teeth fuse together to form tooth plates which they use to chew their food (all lungfishes are omnivorous). 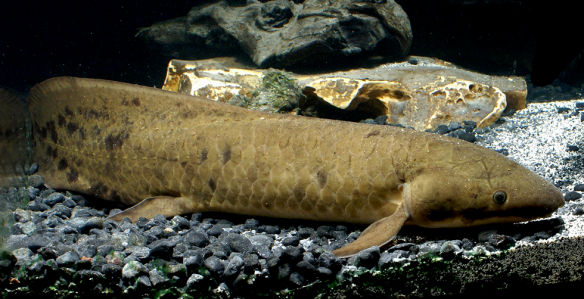 The Australian lungfish (also known as Queensland lungfish) can be distinguished from other extant lungfishes by its large flipper-like fins and large scales; South American and African lungfishes (Lepidosireniformes) possess slender fins and small scales.  N. forsteri also possesses a single lung, as opposed to two lungs in Lepidosireniformes.  If kept wet, Australian lungfish can survives for prolonged periods out of water (they can breathe air using their lung), however, they cannot survive complete desiccation like African and South American lungfishes.

N. forsteri is native to the Mary and Burnett River systems in southeastern Queensland (western Australia).  This species is protected under CITES; although there is a single authorized commercial farm operation propagating these fish. 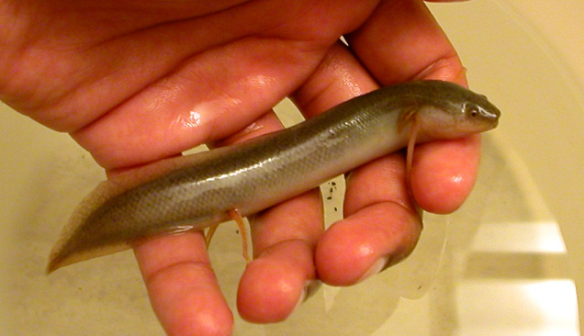 African lungfishes can survive prolonged periods of desiccation by burrowing into the mud and creating a mucus cocoon.  This state of dormancy is known as estivation (aestivation).

The South American lungfish can be distinguished from other lungfishes (except Propterus dolloi) by its extremely elongate body.  L. paradoxa can be differentiated from P. dolloi by its short pectoral and pelvic fins, P. dolloi has longer paired fins.  L. paradoxa is an obligate air-breather like Protopteridae, but does not create a mucus cocoon when undergoing estivation.  Male South American lungfish possess fleshy extensions along the posterior of the pelvic fins.  The exact function of these structures is not fully known, however, they are believed to aid in oxygenating the nest, which the male guards.